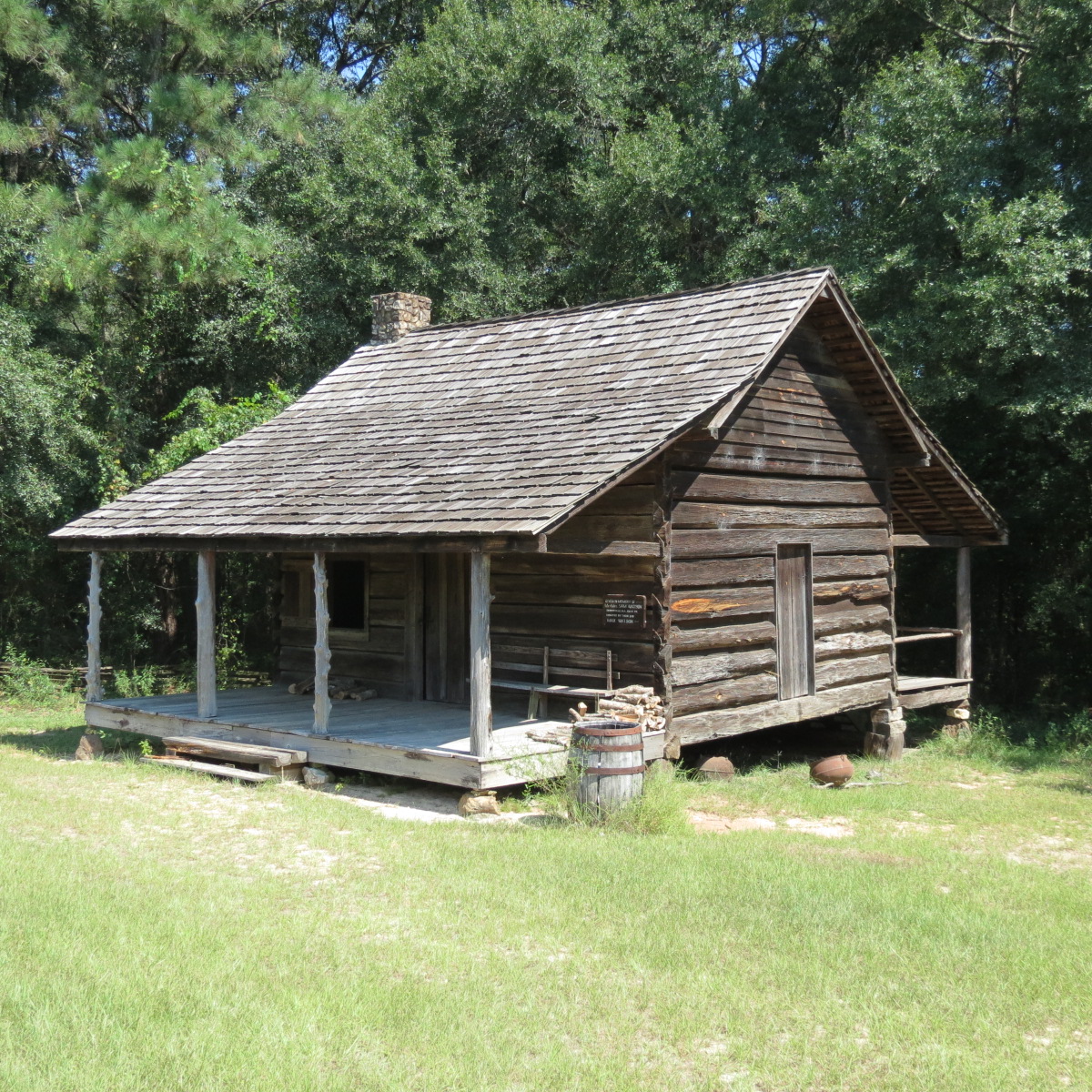 Nestled at the edge of the Landmark Park woods behind the farmstead sits the Watson Cabin, built in the 1860s and donated in 1987 by Max Watson of Dale County, Alabama, to honor his father, Sam Watson.

The single-pen cabin is made from logs hewn square by broadax and saw; scars of both are clearly visible.  It has three doors, two boarded windows, and a single fireplace.  It has a front and back porch, a shake roof with a steep pitch to shed rainfall, and logs joined with half-dovetail notches that also shed water.  The cabin is raised on piers for ventilation, the two porch roofs are held by posts made from unhewn trees, and long porch lintels are made of beams joined by shiplap joints.

Over time, residents added a brick chimney, an enclosed back porch, a shed-roofed addition with two small rooms accessible through the side door, and a sleeping loft with access ladder.  These were dismantled when Phillip Hunter of Dothan moved the cabin to Landmark Park in February 1987.  Dothan stone mason Fred West rebuilt the stone flue and chimney as the original might have been.

According to Ruby Griggs Riley, the cabin originally sat along the Choctawhatchee River about one mile from Skipperville.  She said Sidney Deese moved the cabin to his farm during the Civil War, but Judge Val McGee reported that the Deese family moved to the farm about 1880.  Frank O. Deese inherited the farm from his father and sold it to Robert DeBell Griggs.  Griggs’s son, John Marshall Griggs, raised his family of 13 children in the cabin at the turn of the 20th century.  One of his daughters was Ruby Griggs Riley.

The farm and cabin sold twice more before 1987—first to Dr. D. P. Mixon before the Great Depression (who used it for tenant farming) and then to Sam Watson during the Depression for $6 per acre.  Max Watson bought the farm from his father’s estate, then in 1987 donated it to Landmark Park rather than tear it down.

The cabin’s most prominent resident was Dale County Probate Judge Frank O. Deese, born near Clopton in 1877.  His family moved to the cabin soon thereafter, and he attended school through the sixth grade.  He taught school in the county, 1899-1918, then served one term in the Alabama legislature.  From 1922 until his election as probate judge in 1934, he worked for the Federal Land Bank and the Alabama Tax Commission.  During World War II, Judge Deese wrote all 2500 Dale County servicemen three times per year.  All soldiers, white and black, he said, were “gentlemen and scholars” who deserved his respect.

After the war, Deese oversaw the paving of 200 miles of Dale County roads during Governor “Big Jim” Folsom’s farm-to-market road program, presided over the construction of the Dale County Office Building and hospital, and converted the county almshouse into a modern welfare program.  A widower twice over, he retired in 1952 and lived with his third wife, Bertha Martin Brabham of Enterprise, until his death in 1959.